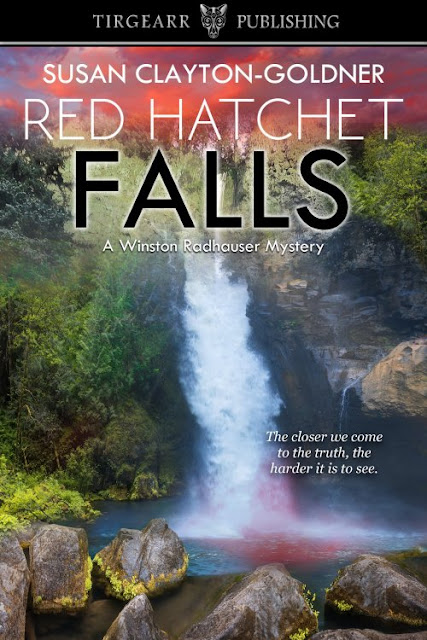 The idyllic town of Ashland is nestled in the foothills of Siskiyou Mountains. Locals often describe it as a little bit of England set down in Southern Oregon. Yet amidst the historic craftsman bungalows, the world-renown Shakespeare theaters, and the lush, manicured gardens in Lithia Park, something evil lurks.
While walking his pet raccoon, 72-year-old Homer Sullivan spots something shiny sparkling in the leaves near Ashland Creek. Thinking it might be something valuable, he hurries over to retrieve it, hoping he’ll become someone’s hero. He panics when he discovers it's a diamond ring and it's attached to a severed hand. He must find Detective Radhauser and fast.

Winston Radhauser has always searched for the truth. Set just eight months post 9-11, a young Islamic family is terrorized, and the severed hand is only the beginning. This time, Radhauser is tested to his limits, but will the truth devastate him?

When his cell phone rang, Radhauser pulled it out of his back pocket and glanced at the caller ID. It was Captain Murphy. Radhauser stepped away from third base to the area behind the dugout to answer. This was Radhauser’s day off. He wanted nothing more than to ignore the call and return to Lizzie’s game. “What’s up?”
“I’m at the station. And you need to get over here.” His voice was gruff, the one he used to flaunt his authority.

The smell of popcorn and hotdogs grilling wafted over from the snack bar and he remembered his promise to his daughter. “Not possible. I’m in the middle of my daughter’s baseball game. And I’m coaching third base.”

“I don’t care if you’re up to bat with a tied score, two outs and the bases loaded. We need you here. Now.” Murphy had that indignant and slightly nervous tone. It told Radhauser either his boss was in a bad mood or something important had come up. While his captain rambled on about wishing he hadn’t stopped by the station on a Saturday morning, Radhauser looked around the park.

There were five Little League fields and today the manicured grounds held a sea of miniature ballplayers in multicolored caps. Kids shouted and cheered for their teammates. Coaches instructed their players. Keep your eye on the ball. Level swing. Wait for a good one. Anxious parents paced the sidelines. Others played catch with their kids, warming them up and waiting for the next game to begin.

“Give me twenty minutes, Murph. The game’s almost over. Lizzie will need a ride home.”

"Find her one, Wind. I've already wasted enough time with this old man who claims— and I quote, ‘has aided you in other police investigations.' Not to mention his pet. He and his damn raccoon found something he's certain you'll want to see."

Radhauser paced the grassy area behind the dugout. The sound of a loud voice distracted him. He looked around for the source.

To the left of the snack bar, in another grassy section, a tall, slender man with a red beard berated a player for striking out. He wore a green baseball cap and shirt that matched the ones the little boy wore. Both of the man's hands were planted on the boy's shoulders, shaking him. "Didn't I tell you to keep your eyes on the ball? Level swing. How many times have I told you not to swing at the low ones? You looked like you were playing golf out there." He let go of the boy and clenched his hands into fists.

Radhauser had a bad feeling this was the kid’s father. Talk about life not being fair.

The boy hung his head.

Radhauser watched for a moment, wanting to rescue the boy, but spoke into his phone instead. “It’s got to be Homer Sullivan.”

He’d met Sully while investigating a drowning that turned out to be a murder. It was over a year ago at Sunset Lake where Sully lived alone in a small cabin at the edge of the water. "Come on, Murph. This game is important to Lizzie. I don't get to spend enough time with my kids. And I promised we'd have lunch at the snack bar afterward. Don't call me on my day off to babysit Sully."

“He’s not claiming to be my deputy. Now get your ass in here. That’s an order.”

“I’ll be right there.” He hung up, then slammed the phone against his thigh. It was the first elimination round and Lizzie’s team, the Cardinals, had a good chance of winning.

When Cooper agreed to drive Lizzie home, Radhauser took a twenty-dollar bill from his wallet and handed it to him. “Buy Lizzie and yourself some lunch when the game is over.”

After thanking Cooper, Radhauser stepped into the dugout and whispered in his daughter’s ear. “I have to go, sweetie. Coach Cooper will get you that hotdog from the snack bar I promised and give you a ride home.”

Her dark eyes twinkled and her smile was big and bright as a birthday morning. Not a hint of disappointment. “That’s so great. Thanks, Daddy.” She gave him a quick wave, a flutter of small fingers in the still air, then turned her adoring gaze back on Cooper Drake. Susan Clayton-Goldner was born in New Castle, Delaware and grew up with four brothers along the banks of the Delaware River. She is a graduate of the University of Arizona's Creative Writing Program and has been writing most of her life. Her novels have been finalists for The Hemingway Award, the Heeken Foundation Fellowship, the Writers Foundation and the Publishing On-line Contest. Susan won the National Writers' Association Novel Award twice for unpublished novels and her poetry was nominated for a Pushcart Prize.
Her work has appeared in numerous literary journals and anthologies, including Animals as Teachers and Healers, published by Ballantine Books, Our Mothers/Ourselves, by the Greenwood Publishing Group, The Hawaii Pacific Review-Best of a Decade, and New Millennium Writings. A collection of her poems, A Question of Mortality was released in 2014 by Wellstone Press. Prior to writing full time, Susan worked as the Director of Corporate Relations for University Medical Center in Tucson, Arizona.

Susan shares a life in Grants Pass, Oregon with her husband, Andreas, her fictional characters, and more books than one person could count.